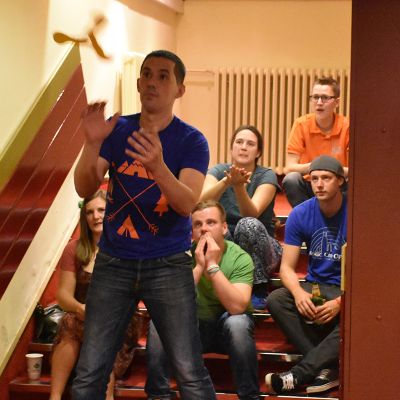 Aside of the main tournament several side events will took part - recreational tournament, team building games, putting and park it! contest. Each tournament afternoon and evening players will have an option for an entertainment of some kind.

In the past years we have already established disc golf related games Lagoda putting contest and approach Lagoda Park it! contest. Also, on one evening traditionally we have a lot of laughs at Players party that includes "The model of the Drava Forester" contest, lottery, auction etc. Past three years we have organized team building games that proved to be something all participants really enjoyed. This year it is scheduled for Wednesday evening.

For info about recreational tournament check out Beer Forester page.


Lagoda Putting contest will be held indoors at hotel Turist in two parts - qualifications and finals. All interested players, as well as visitors of the tournament will be able to participate in qualifying rounds on Thursday and Saturday, while the finals will be held on Saturday evening.
In qualifying rounds all players get to use 10 discs (provided by organizers) and use those for putting from distances marked at 6 to 12 meters. Each successfully putted disc brings the same number of points as the distance it was made from. Each player can make up to 3 qualifying sessions, and top 10 players will move to the finals.

Lagoda Park it! contest will be played outside of the Arena Varaždin after the rounds. In qualifying rounds all players will get 5 discs (provided by organizers) and use those to approach and park as close as possible to the mark. The distances up to 5 meters are measured in centimeters and summed up for a players overall score. Top 5 players will move to the finals.

Drava Forester team building will be a side event in which we will mix joining players in to groups of 5-6 people who will then compete in several short and fun games - guessing the main ingrediend of a mystery fruit wine, building a highest card tower, mini disc accuracy etc.

Lagoda Team Game will be a 3rd edition of the disc golf game played by teams of 3 players on a 9-hole course. Two rounds will be played on Friday and Saturday afternoon.

During the evening on Saturday there will be a players party with a dress code set to colors that are pink and/or sparkling (gold or silver) and/or black. The colors of the dress code can be combined in any way you like in clothes or accessories (hat, scarf...), and though it is not mandatory we would like to see a lot of you wearing this colors for the party to have a special touch.

For Beer Forester recreational tournament open the info page at the link below.

The details on other side events will be updated as soon as we will have all the info.