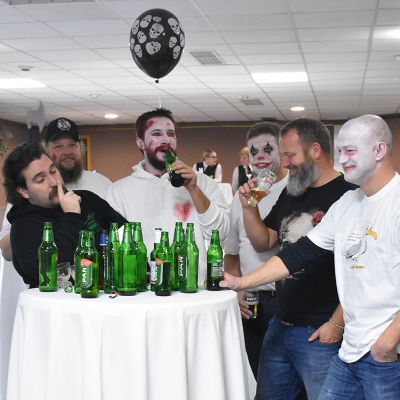 Through past years, as the tournament was growing, we have changed some things and kept the others.

Here you can find the answers on few questions we were asked in the past...

Why is there no payout?
Our vision of the Drava Forester event is to bring over disc golfers from all over the world who love the sport, but also enjoy having fun after the rounds, who will want to join a wine tasting event, a team building games or party a bit longer then it might be recommended if you are playing next morning.
Having payout was considered, but we have decided to keep it out of this tournament as that would, for sure bring more high rated players, but at the same time a chance to earn money would grow tensions among the top players, force some of them to think twice to party or go early to bed etc.
We believe that keeping Drava Forester as an event with no money prizes will keep growing this event with just the right people – the same as we have been having around in the past years and who have helped us to make it a perfect environment to play disc golf and have a lot of fun out of the course.

Why are there only MPO and FPO categories?
Similar as our thoughts on money prizes, we believe that Drava Forester is more about playing and enjoying it over winning a title against one or two other players in your division. That is why we think that there is no need for additional divisions, and that the only important thing for a player at Drava Forester should be – playing against opponents of skills similar to yours (no division separations in 1st and 2nd round) and trying to make the best score you can on the given course. We hope that you will agree.

Why is the main tournament played in one round on three days?
For the first three years Drava Forester was played in a 2-day weekend format of 3 rounds but we have soon realized that this is not the best way to organize an event that we hoped Drava Forester will become. In November, when it is played, days are way shorter and after 16:30 daylight can already be gone, so one year we have had a lot of problems to complete 2nd Saturday round as due to the bad rainy and clouded weather the visibility was very poor even before that time.
Aside from that, in that time of the year, although it is not very common in Varaždin, it could get very cold and we might have snow, what would turn a two rounds a day into a not at all pleasant experience for some players.
One more, very important thing we had to consider was the fact that after playing two rounds quite big number of players is exhausted and very early "ready for bed", what would lead to less player joining in for the side events (or even no time for all side events we have planned), and all in all - less fun and fewer new disc golf friendships.
At the current tournament format, playing a single round each day, even if it is raining (or snowing), after the round players can go back to the hotel, change their clothes, rest a bit and then be ready for some fun times.