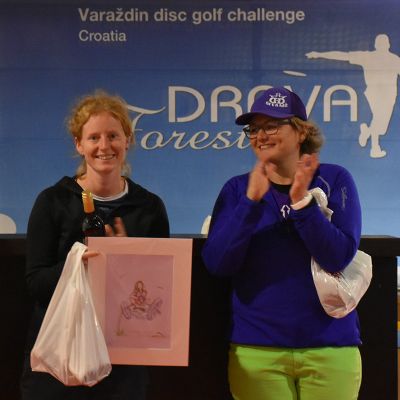 First Drava Forester was held on 24th and 25th November 2012 with the participation of 30 players from Slovenia, Croatia, Austria and Norway. Since then ... players from ... countries played it at least once, and out of those ... players played it two or more times.

Drava Forester 2021
The info on the 9th edition of the tournament can be found in an article linked at the bottom of this page.

Drava Forester 2019
The info on the 8th edition of the tournament will be available soon...

Drava Forester 2018
The info on the 7th edition of the tournament will be available soon...

Drava Forester 2017
The info on the 6th edition of the tournament will be available soon...

Drava Forester 2016
From November 4 to 6 of 2016 the fifth tournament was held with 93 players joining in from 15 countries, among which was one of the best players in the world - American Philo Brathwaite.

The competition was held in three 21-hole rounds that were played on Friday, Saturday and Sunday, what was followed by the final round for top five FPO players and top six MPO players who demonstrated their knowledge and skills in front of a gallery.

The winner of the tournament, among male players, as it was expected, become, according to the rating, the 25th player in the world, Philo Brathwaite.
Second place went to the winner of the 2013 tournament Matias Söderström of Finland, and the third place went to Germany's Martin Doerken. Along to them, final round was played by Teemu Malmelin from Finland, Michal Kudela from Slovakia and Jan Baess from Germany.

Female category was won by one of the best players in the world and the bearer of a silver medal from this year's European Championship Slovak Katka Bodova, while second place went to last year's winner Natalie Hollokoi from Switzerland. Third place went to Germany's Wiebke Becker. Along to them final round was played by Alessa Shwarz from Germany and Sona Švecova from Slovakia.

In his victory speech Philo Brathwaite noted that he really enjoyed this tournament where he gained many new friends and explored a new culture and customs, and especially thanked the organizers of the company Lagoda Disc Golf and announced his very likely return to Varazdin in one year.

The FPO winner Katka Bodova, praised the organization of the tournament and said that it was really a pleasure to participate in Varazdin tournament for the fourth time.

The organizers have prepared many side events so all players had a chance to, along to the competition rounds, enjoy the local attractions, try traditional dishes and the wine and socialize with other participants, as well as other inhabitants of Varazdin.

The complete results of the tournament can be found on the PDGA website.

As a side event recreational tournament called Beer Forester was played by 7 players from Croatia, Slovakia and Hungary. Winners were Péter Hársfai from Hungary and Zagreb junior Ana Gorički.

DravaForester 2015
The fourth edition of the tournament was the first in the new 3-day format with one 21-hole round played each day. This reduced the number of players to 54 in the main event and 13 in the recreational Beer Forester. Women’s category was played by 8 competitors, and the win was from the start in the hands of Swiss Natalie Holloköi. 46 players competed in the MPO and it was thrilling till the end of the finals when German Dominik Stampfer, a 2013 runner-up, secured a two stroke victory over 2013 winner Matias Söderström.

DravaForester2014
The third edition of the tournament was held on 7th to 9th November of 2014. This tournament was attended by 84 male and female players from 12 countries. In addition to the main tournament, for the first time we have organized recreational tournament. We were particularly happy with the participation by Jenni Eskelinen, the current European women champion.

Women’s category of the main tournament was played by 12 competitors. Katharina Gusenbauer of Austria took the victory, second place went to Slovakian Katka Bodova (winner from 2013), and the third was place was won by Finland's Jenni Eskelinen. 55 players joined men's tournament. The winner was the Finn Teemu Malmelin in front of compatriot Matias Söderström (winner from 2013). The third place went to American with Croatian address Mike Gordon. The full results of the main tournament can be found at PDGA website.
In a recreational tournament 18 female and male players competed in two rounds, one each day.

The entire report from Drava Forester 2014 in the form of a PDF document can be downloaded at the bottom of this page.

Drava Forester 2013
The second edition of the Drava Forester, held on November 8th to 10th in 2013, was the first tournament in Croatia sanctioned by the PDGA. The tournament was attended by 50 players from 12 European countries. Official accommodation was at the hotel "Varazdin". The event was covered by all regional and some national media. Organizers were guests live in the studio of local VTV television, two TV crews were present at the course, organizers were guests on three radiostations, and press releases were transferred on many Internet portals.

Among the men 43 players competed. The victory was won by Matias Söderström from Finland who demonstrated exceptional game and scored an "hole in one" on the last hole of the tournament finals. Second place went to the German player Dominik Stampfer, and third was won by Austrian Otfried Derschmidt.

The full results of the tournament can be found at PDGA page.

Drava Forester 2012
Varazdin first disc golf tournament was held on 24th and 25th November of 2012 with the participation of 30 players from Austria, Slovenia, Norway and Croatia.

Six female players competed for the title among the women. Slovenian Jasmina Pištan won the event while second place went to local player MajaŠimenc, and the third to Austria's Eva Maria Pirchenfellner.

Among the men 24 players competed. The winner of the tournament was Mike Gordon, American with Croatian address, second place went to Austrian Otfried Derschmidt, and the third also to Austrian player Harald Neumayr.

The overall results of the tournament can be found in our photo gallery.